If you already have Flutter installed, just type the command flutter upgrade to get the latest build. If you don’t, follow the getting started guide for Windows, macOS, or Linux.

This is the sixth preview. Flutter was first announced as an early alpha at Google’s I/O developers conference in May 2017. The first beta arrived in February, followed by two more, and then two release previews. Meant to compete with frameworks like Facebook’s React Native, the library is designed to combine the performance and platform integrations of native mobile with the rapid development and multi-platform reach of portable UI toolkits. Flutter apps are built using Google’s Dart programming language.

Flutter Release Preview 2 includes support for executing Dart code in the background, even while the application is suspended. Plugin authors can use this to create new plugins that execute code upon an event being triggered, such as the firing of a timer or the receipt of a location update.

This release also reduces the application package size on both Android and iOS by up to 30 percent. The minimal Flutter app bundle on Android now weighs in at 4.7MB, a savings of 2MB since the Flutter project began (further optimizations are in the works). On iOS, your mileage may vary because of how iOS packages are built.

On the other hand, Preview 2 promises “pixel-perfect iOS apps.” While Flutter is supposed to be agnostic of any single user interface theme, for teams that want to build applications that follow Apple’s interface guidelines, this release expands support for the “Cupertino” themed controls in Flutter with iOS-specific widgets and classes.

Google says new developers are continuing to adopt Flutter. The company notes that thousands of Flutter-based apps have already made it to the Apple App Store and Google Play, even before version 1.0, including some of the world’s most popular: Alibaba (Android, iOS), Tencent Now (Android, iOS), and Google Ads (Android, iOS).

Flutter has also broken into the top 50 active software repositories on GitHub: 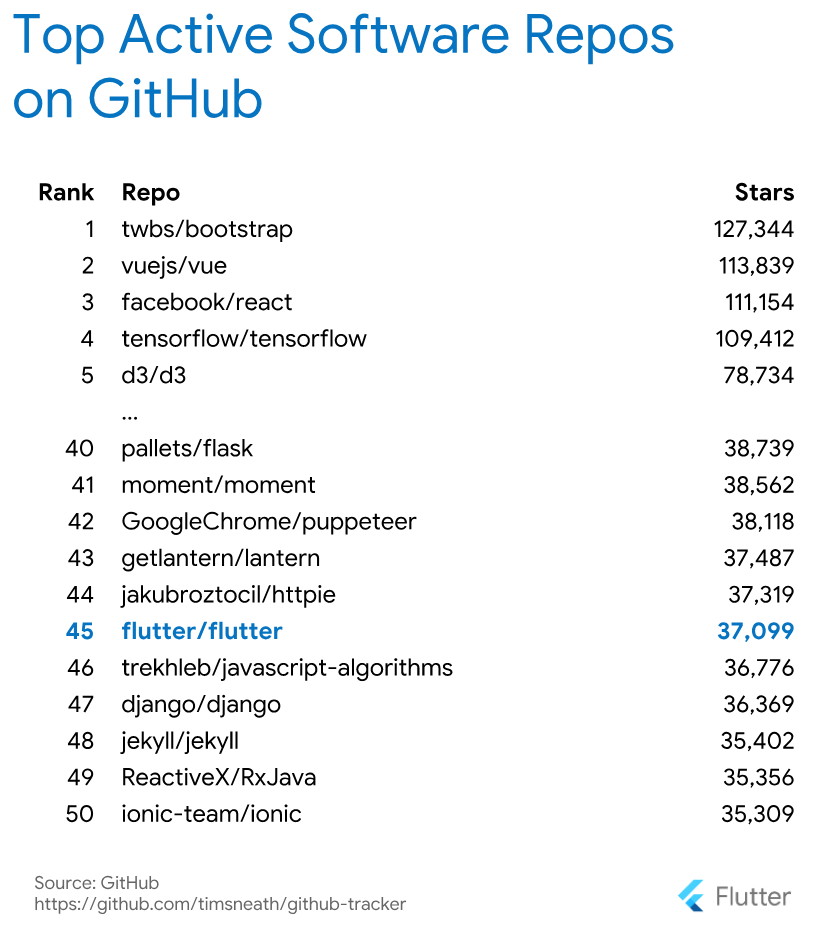 On StackOverflow, Flutter activity (new questions being posted, answered, and viewed) is also on the rise: